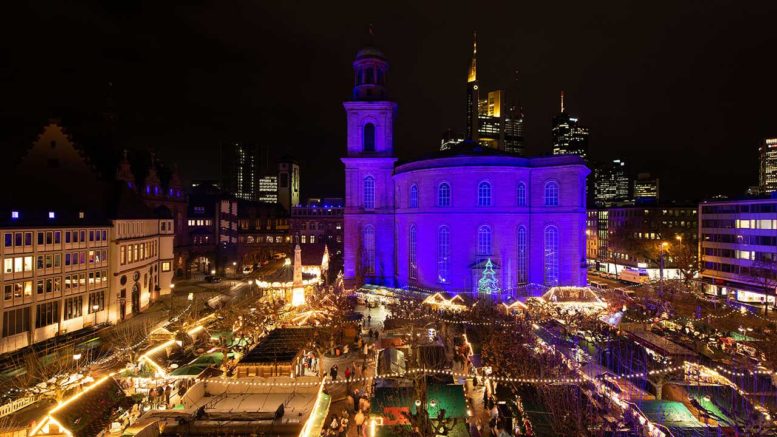 Eugen Blersch and Benny Coppik of Frankfurt based AES Veranstaltungstechnik drove this project to light the landmark – originally a Lutheran Church in 1789, the year of the French Revolution and now a busy and charismatic events space – in a special blue colour.
In 1848 the Paulskirche became the seat of the first German National Assembly – publicly and freely elected legislative body – and an important symbol in the struggle for human rights.

Working for Frankfurt city council and sponsored by the local branch of Human Rights Watch, Eugen and Benny first realised this lighting installation in 2017.

AES’s Project’s department has an event safety division with close ties to many of the city’s municipal authorities like the police, fire brigade, ambulance service, etc., and a proposal to illuminate the building for this special day had been in existence for some time… however there were several major physical challenges, explains Eugen.

A seasonal Christmas Market in very close proximity to the Paulskirche made it impossible to run any cables or rig large lights / stands anywhere that was convenient for an effective lighting scheme.
Some lateral and practical thinking to overcome this obstacle led to specification of the Astera battery powered wirelessly operated LED system as a solution.

In addition to the major advantage of needing no cables, the fixtures, which comprised 150 x Astera AX10 SpotMax’s, 50 x AX7 SpotLites and AX5 TriplePARs from the German manufacturer offer seamless battery management plus bi-directional communication and control via a neat, intuitive tablet app.
“In my opinion, Astera is the best such LED fixture currently capable of realising a tricky and exacting installation like this in a short timeframe” stated Eugen.
An IP65 rating also makes them ideal for outdoor use in scenarios where the weather is unpredictable or inclement, and their beautifully homogenised lightsource produces a rich, high quality output which is essential to wash large surface areas smoothly and seamlessly.
The fixtures needed to be positioned all around the building which is around 50 metres long, 50 wide and 20 metres high, and this took some creativity!

Some were clamped to the sides of the church on custom brackets with others positioned strategically on the rooftops of neighbouring buildings as well as on a series of trucks parked on the streets below.
Those attached higher up the building and on the roof positions were installed by a team of experienced ‘working at height’ technicians.
Apart from being a total challenge to get lighting units into all these different locations… it would have been near impossible to have had to run cables to all of them!

Gaining access to all the adjacent properties and premises and blocking the relevant parking spaces required a serious amount of time and preparation, and this is also where AES’s local government contacts were extremely useful!
There was the additional challenge of effectively lighting the lumen-consuming red brick surface in the deep electric blue colour, which required extremely accurate positioning of fixtures.

These specific Astera luminaires were selected to ensure that every centimetre of the walls and the spire of the Paulskirche was evenly bathed in excellent light for the duration of the installation which ran from 5 – 9 p.m.
“These three very strong Astera products provided the comprehensive coverage we needed” commented Eugen, “and thanks to Astera’s carefully calibrated LED engine, we could produce the fabulous blue of the signature colour”.

He added that to have all these attributes available in one fixture is a fantastic tool for any lighting designer.
With a tight budget, Eugen worked closely with several people, companies and organisations to make the installation happen including Ulrike and Harald von Waitz and the Polyma company, Ulrike Klinke-Kobale on the PR plus MBF Filmtechnik and Uwe Heller and his crew.

A hundred of the luminaires were supplied by Kaiser Showtechnik.
Also instrumental were WISAG security and the Frankfurt Town Council administration who green-lighted the project.
AES’s Benny Coppik managed all the permissions, while Detlev Funk from Sycra Solutions offered technical direction for the rooftop elements of the installation and Lucas Bouschka co-ordinated the rigging and industrial climbing.

The illumination of the Paulskirche attracted lots of local and national press and was a huge hit with the public, generating plenty of social media chatter and engagement on the night, pulling additional crowds into the area for the evening.
Importantly, it recognised and highlighted the seminal work of Human Rights organisations worldwide who tirelessly defend and fight for the basic rights of every human being on the planet. 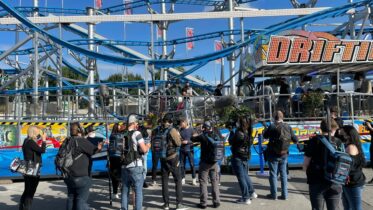