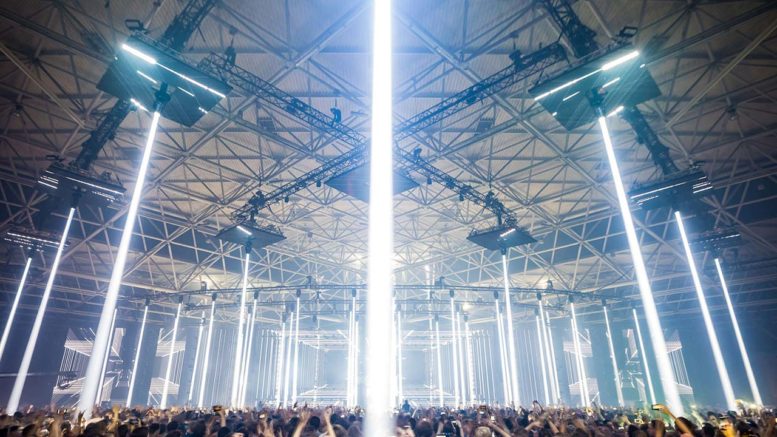 Garrix’s lighting designer Gabe Fraboni once again had the chance to create a spectacular new visual experience – to be enjoyed by Martin Garrix fans globally for the next 12 months – which he did with the help of nearly 300 Robe moving lights – 80 x MegaPointes, 166 x Spikies and 52 x LEDBeam 150s.

Gabe uses Robe for all of his designs, and comments, “Robe is my default brand of moving light right now! The products are so versatile and the range so diverse that it fulfils everything I need.”

Once again, he worked closely with scenic designer Bart Straver and VJ / video content creator Lorenzo de Pascalis in a rich, provocative and imaginative creative collaboration that rocked some breath-taking results and ensured that Garrix’ shows are right up there among the best and most exciting in the world of dance music.

While last year’s show had been all about asymmetry, this year Gabe wanted something completely different … but that also retained some threads of continuity like the industrial look and style.

At the artist’s request, the central LED ’plus’ sign right behind the DJ booth remained. Gabe again wanted to be able echo this shape and form across the rig, but this time with the harmony and balance of symmetry.

In embracing this mindset, another important factor was involving the audience in the action – pulling them right into the show making it an immersive and fully four-dimensional experience, rather than a passive viewing equation.

While last year the ‘repeat’ effect was achieved through the physical setup of the trussing and the rig’s lighting components, this year Gabe introduced automation to accentuate echoes and repeat patterns, a concept that required symmetry yet was totally dynamic. To ensure the complete feeling of envelopment, he decided that this should be above the audience to fulfil the immersive goals of the design.

The grid of MegaPointe / LED pods above the crowd was created utilizing 30 of the Robe MegaPointes each rigged on an individual Cyberhoist motor for up / down movement.

The automation system was supplied by Unlimited Productions sourced by production manager Bert Kelchtermans. The chain and cables for each Cyberhoist was enclosed in a custom-designed spun aluminium telescopic tube which expanded and contracted as the hoist lifted and dropped the MegaPointes in and out, going as low as 5.5 metres, just above the heads of the audience.

The ‘top’ of each hoist pod was clad in a 3×3 metre square of 3.9MM LED screen with a gap in the centre for the aluminium tube. The home position was 10 metres above the floor which was as much headroom as they could squeeze out of the RAI.

The audience reaction the first time the MegaPointes came in from the pods each night was phenomenal, “a real ‘goosebump’ moment” described Gabe with obvious delight.

With those 30 fixtures distributed – and dynamically moving – across the barn like environs of the RAI, he could turn it from a massive impersonal arena into an intimate clubby space almost instantaneously. It was an extremely powerful visual effect which could also shift, twist and bend the architecture of the space.

“MegaPointes can be SO many different things” commented Gabe, “that these 30 fixtures combined with the ones on the main rig and the automation … gave me a different lighting rig for each song.”

MegaPointes were also ideal for this specific task due to their light weight and compact dimensions.
Gabe’s original inspirations for evolving this grid effect included Andi Watson’s recent exquisite designs for Radiohead – applied in a very different context. He’s also been consistently impressed by the architectural and structural visions and approach of the late Mark Fisher’s work and of Stufish which continues to develop and originate incredible stage and show imagineering.

Making “ANIMA” come to life is something Gabe has found totally “creatively invigorating”.
Moving back onstage at the RAI gig … a 52-metre-wide by 9-metre-high LED wall defined the stage area and in front of this each side were structures providing three vertical strips of positions for the Spikies, repeating the form of the ‘plus’ video sculpture.

Above and below the main section of this video wall were 10 x MegaPointes and 10 x strobes for silhouetting and accentuating the depth of the performance area. The balance of MegaPointes were rigged on three concentric arc trusses above the stage.
Out in the house, the LEDBeam 150s were located between each of the LED / MegaPointe / Cyberhoist pods. They provided additional effects, fabulous beams, more crowd interaction and effectively lit the audience for an upcoming You Tube stream.

As well as the Robe fixtures, the design featured 76 x LED strobes, 100 x 1-lite blinders and 21 x 4-lite blinders, all supplied to the show by lighting vendor Focus / RentAll.
Thirty lasers were integrated into these RAI shows, provided by Laser Image from the Netherlands.

Gabe and Lorenzo work closely on crafting the show’s live visuals, matching the colours, textures and movements between video and lighting into one seamless visual world with which – together with the magic of Garrix’s mixing – offers a truly intense audience experience.

Gabe has been using Robe constantly in his work for the last three years.
“The products are incredible! The company is really tuned to what the market – and LDs in particular – want and need, they move with the times and constantly produce excellent innovative products that raise the bar, are reliable and good value. The general service side of the company worldwide is also really impressive.”
Martin Garrix’s “ANIMA” show will be touring – with Robe on the specs supplied locally in Latin America and Asia – until the end of the year. From March 2019, Garrix and his talented and passionate creative team will be working constantly across Europe and the US. 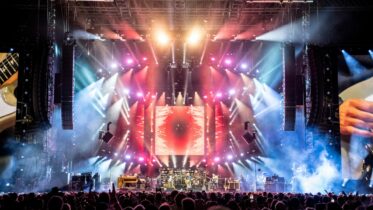